There’s a reason many adult smokers across America, and countries across the globe, are turning to vaping as an alternative to smoking. The reason is simple. It works. I started smoking cigarettes when I was 18 and tried numerous times to quit. I tried Chantix, nicotine replacement therapies (NRT), and even cold turkey. Nothing seemed to work. Inevitably, within months, I would be back to smoking cigarettes. Once, I even stayed quit for a year, but one long business trip to a country filled with smokers ruined my resolve and I picked the habit back up again.

This all changed when I picked up vaping. I have not touched a cigarette since. I have had zero desire to grab for a cigarette and the smell of cigarette smoke disgusts me. I no longer cough every morning after I wake up, my sense of smell has returned, and I feel healthier than I have in years. My story is not unique. Thousands of smokers have turned to vaping and haven’t looked back.

Anecdotal data is fine, but what does the science say? A study from the New England Journal of Medicine published in early 2019 examined a group of smokers attempting to quit. The 886 participants were divided into groups and half were given e-cigarettes while the other half were given nicotine replacement therapies (patch, gum, lozenge, nasal spray, inhalator, mouth spray, mouth strip, and microtabs). After one year, 18% of the e-cigarette group had quit smoking, while only 9.9% of the nicotine replacement group had quit.1 The conclusion was clear; e-cigarettes or vaping were significantly more effective than NRT in assisting smokers in quitting cigarettes.

Furthermore, other countries have adopted the position that vaping is a safer alternative to smoking and that vaping should be used as a smoking cessation aid. The U.K. Royal College of Physicians released a statement saying, “In the interests of public health it is important to promote the use of e-cigarettes, NRT and other non-tobacco nicotine products as widely as possible as a substitute for smoking in the U.K.”.2 Their guidance is clear. Vaping should be presented as a quitting option to smokers. The NHS (the U.K.’s publicly-funded healthcare system) has guidance published on its website for smokers wishing to quit the habit. They advise,

Many thousands of people in the UK have already stopped smoking with the help of an e-cigarette. There’s growing evidence that they can be effective.

Using an e-cigarette can help you manage your nicotine cravings. To get the best out of it, make sure you’re using it as much as you need to and with the right strength of nicotine in your e-liquid.

A major UK clinical trial published in 2019 found that, when combined with expert face-to-face support, people who used e-cigarettes to quit smoking were twice as likely to succeed as people who used other nicotine replacement products, such as patches or gum.

You will not get the full benefit from vaping unless you stop smoking cigarettes completely. You can get advice from a specialist vape shop or your local stop smoking service.

Getting expert help from your local stop smoking service gives you the best chance of quitting smoking for good.3

In addition to the NHS, the British Medical Association has also published material on e-cigarettes and quitting smoking. Their 2017 position paper on the topic notes that e-cigarettes have become the most popular method of smoking cessation, with 34% of smokers attempting to quit using them versus 15% of smokers attempting to quit using NRT.4 It is clear that smokers perceive e-cigarettes to be an effective method or they wouldn’t be so popular. The British Medical Association also noted that on a population level, increased vaping levels correspond to increased smoking cessation rates. While the vaping industry is relatively new and therefore few longitudinal studies are available, evidence cited in this paper is certainly encouraging.

When will the U.S. accept and embrace vaping as an effective smoking cessation method? The answer to this question is yet to be seen. With ever-changing political dynamics, it’s hard to look into a crystal ball and see the future. What is certain, though, is that over 480,000 Americans die every year from tobacco-related causes. We should be doing everything in our power to curb these unnecessary deaths. Vaping and e-cigarettes have proven effective for thousands of Americans, myself included, as a smoking cessation tool. I know with absolute certainty that if I had not taken up vaping, I would still be smoking. For the sake of saving lives, the US should be doing everything in its power to promote tobacco harm reduction. That includes stopping the legislative assault on vaping and encouraging smokers to pick up vaping to kick the cigarette habit for good. 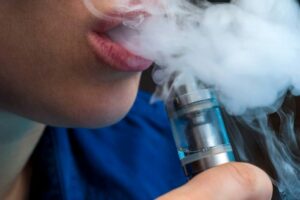